How to update Google Chrome

Who I am
Alejandra Rangel
@alejandrarangel 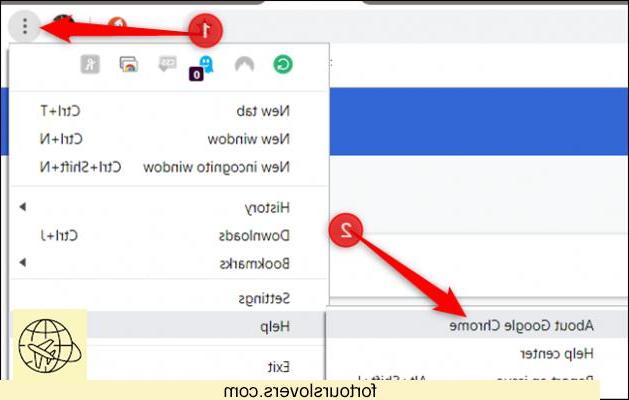 Google Chrome is the most used web browser in the world. Its strengths include ease of use, cross-platform synchronization and automatic updates. Chrome usually updates automatically but there are exceptions. For causes that Google Chrome always works correctly it can update even manually.

Updating our browser is important for at least two reasons.

How to update Google Chrome on Windows

As we said earlier, theupdating of the browser Chrome is set to update automatically. When Chrome has an update pending, a colored icon will appear in the upper right corner of the browser. In particular, the icon can take on the following colors depending on the time from which the updates are available.

In this case, to install the pending update, just click on the colored icon and restart the browser. If, on the other hand, we do not want to check for updates, we can proceed as follows:

If Chrome is up to date, the message "Google Chrome is up to date"with the installed version number below. In some cases, Chrome will download the latest update available and then show a screen similar to the one in the photo above. In this case, you will need to restart your browser to install the update.

To update the Google Chrome browser on macOS, the procedure to be performed is identical to that established for Windows, as the navigation program works the same. Even on Mac, in fact, the browser is updated automatically and no manual intervention is necessary in addition to restarting the program, should it be requested. You can also check if there are new updates by following this procedure: press the 3 dots at the top right, and go to the Help menu> About Google Chrome. In case there is an update, restart the browser to install it.

update the Google browser Chrome on Android devices you have to open the play store, which is the default virtual store for google devices. Once opened, press the icon at the top left and click on "My apps and games". Once this is done, check in the updates section, if there is the Google Chrome browser icon. If present, press the Update button to download the update. If there is no Google Chrome app icon on the Android update screen, it means that the latest available version is already installed for the browser in question.

Turn on automatic update on Android

If you want to be sure that Google Chrome is always updated to the latest version, you can activate the automatic application update feature through the play store. To do this, enter the default google virtual store, pressing the icon located on the home screen then click on the 3 dashes icon located in the upper left corner, and go to the settings. Finally, select the automatic app update item. On the next screen, activate the voice only via Wi-Fi, to make the apps update automatically, as soon as your device is connected to a Wi-Fi network.

You want to update the Google Chrome browser on iOS, you have to act through the app store, that is the default virtual store of the iPhone and iPad. First, press the app store icon located on the home screen. Once the store has started, click on the "Updates" button located in the menu bar at the bottom and at this point, if an update is available for the Coogle Chrome browser, you will be able to see its icon on this screen. In this case, press the update button to start downloading the update.

If you want to be sure that Google Chrome is always updated to the latest version, you can activate the automatic update of the iOS apps. To do this, press to enter settings, click on the iTunes Store and App Store item and finally, move the lever to ON, corresponding to the item updates. With this operation, the automatic update of the apps takes place as soon as we connect to the Internet either via packet data or in Wi-Fi mode.

What's new in the latest Google Chrome update for computers

The latest update released by Google Chrome is version 81 which introduces some news for both developers and users. Let's see what are the main news.

Other changes have been made from the point of view of security: now Chrome will automatically block images that do not update on HTTPS protocol. This operation must certainly be seen with a view to completing the adoption of the HTTPS protocol by the managers of the web pages. Also, Chrome 81 deprecated the TLS 1.0 and 1.1 protocols, this means that pages that don't support TLS 1.2 or later will be automatically branded as insecure by the browser.

Also for Android devices, with the latest updates, they are accompanied by interesting news. In fact, google is trying to integrate multiple display support for Chrome, i.e. support for different tabs on the different displays activated in the Android device. This feature is called "Multiple Display", but it is not yet known when it will actually be operational. Also for mobile platforms, Chrome now supports Web NFC, which is the ability to access NFC tags online via the reader built into the mobile device. Clearly it is up to web page developers to figure out how to make the most of these features.

User expectations for the new version

The update of the browser in the Chrome 81 version also brought criticism of the expectations that had accompanied its release. In particular, the criticisms are that the browser continues to be very heavy and causes, on laptops, the continuous activation of the fans. Then there are some features that have been postponed, such as the farewell to the support of the TLS 1.0 and TLS 1.1 encryption protocols, now old and insecure (dating back to 1999 and 2006 respectively).

If it is not possible to update Google Chrome through the procedures indicated in the previous paragraphs or, if other types of problems are encountered, we can still obtain the most recent version of the browser by uninstalling and reinstalling it on our device. In this case, as regards Windows and macOS, to uninstall and reinstall Google Chrome, all you have to do is follow the steps indicated during these operations, from the program itself.

How to update Google Chrome

Audio Video How to update Google Chrome
Google Chromecast: how to use it and how to configure it ❯

add a comment of How to update Google Chrome

This work is under Creative Commons Attribution-NonCommercial-NoDerivatives 4.0 International License. 2023 / expertsconnecting.com