Who I am
Aina Prat
@ainaprat 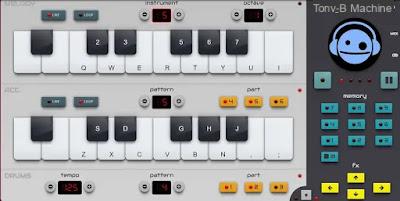 The web applications in the music field are truly amazing and fun for the possibilities they give to those who want to try their hand as a musician without having ever studied the technique and how to write music. Especially with electronic music, the software on PCs work very well and are able to create, in a relatively simple way, compositions where repeated bass and melodies with particular sounds dominate.

We have already seen several examples: free programs to make the same music as professional DJs, sites for mixing music online and DJing on the internet and web applications that allow you to play drums with your PC keyboard.

In this post we therefore point out some Flash web applications that can reproduce an almost real music studio and that allow you to create music online electronics.

I state that I am not an expert in this type of tools so my explanation cannot remain too precise but the important thing is to emphasize the power of these editors composed of electronic consoles that exactly simulate the real ones.

1) Opening the site Audio Tool (formerly Hobnox) is immediately shown an interface with several mixers linked together by connectors designed as real cables. In the consoles already preconfigured it is possible to immediately understand what can be built and, at the bottom there are all the instruments that can be used by the music maker. Indeed it is almost a professional studio which also requires a certain dexterity and experience, not only to correctly set the various mixers and audio levers for each sound frequency, but also to connect the various pieces with virtual cables. It is therefore a question of having a sort of Roland synthesizer and a small online studio where you can also record the music created.
One of the widgets included is the ToneMatrix sound synthesizer that you can try individually to enjoy electronic sounds.

2) Tony-b Machine instead it is an online synthesizer dedicated purely to techno and commercial disco music, the fast one, the typical one of the wildest clubs.
The design of the graphics is beautiful from which we understand that the purpose of the program is not to offer something serious but an instrument with which to have fun and play with electronic sounds. Dance music will have a lot of energy and the use of the online software is quite simple and understandable. The compositions can then be saved and shared with the other DJs on the site.

3) Plink it is really a fun site: at first it generates electronic music with bass and techno sounds, then, using the mouse, you can play it however you want. The site is free and fast to load. The best feature is that even more people can play on the same song simultaneously, creating melodies together with them, like in a multiplayer game. In fact, you can send the link of the melody and all the guests will hear the same and can play it as they want.
If you want to play alone, you can use the plink.in site

4) The best of the web apps to create music certainly is Jam Studio mentioned in another post, not only to obtain electronic rhythms but to compose a real instrumental song made of classical instruments.

5) The Roland TR-808 synthesizer, used by the most famous electronic music artists, has been recreated in a virtual drum machine on the site 808303.studio . The HTML5 version of the instrument allows you to combine sounds and percussion with the ability to adjust the volume and tone of each of them. The controls of this sound synthesizer also support automatic variation based on artificial intelligence and the reproduction of random rhythms.

6) Others sites to play online I'm in another article.

7) From Aviary there is Music Creator, an online multitrack to produce music on the internet.

8) On the site from which we had extracted the melodic synthesizer with hypnotic sounds, there is also the Mixer Roland TR-909 which was widely used to create techno and house music in the 90s. Also on this mixer, you need to have a certain eye for electronic audio equipment because, even if it is only a demonstration program, the many levers to turn and the buttons to press may not be easy to understand for newbies.

9) Sites to play mixed music via the internet like LoopLabs, where there is a really easy to use multitrack that allows you to create house music by adding and mixing sounds and electronic tracks.
Much more serious than the Tony-B Machine, the DubStep Studio (before it was Electro-House Blender) it lends itself very well to making that kind of music to dance and listen to during aperitifs on the beach. So not with too hard sounds with a straight and fast bass drum but a slightly softer and more elaborate house. The tool is used in a simple way, once started with the start, you can watch a video tutorial or start immediately by clicking on the "Click To Mix" button. On the right is the Add Sounds item to browse and preview all the musical sounds that can be used and added to the multitrack in the center of the page. Simple to use as a technique but, as with any musical composition, creating decent and listenable music is difficult even if you write yourself.

10) Beautiful are the ambient sound mixer which stimulate sleep and create restful atmospheres.
In looking for ambient sounds I also came across some programs and sites with relaxing sound effects.

11) Very nice is also the Google 3D synthesizer set to play electronic music of the past.

The fact remains that, given the evolution of instruments, once very expensive, and now available to everyone, skilled composers will have to put all their imagination to create original music that does not seem all the same.