Quik to create videos with photos and music for free

Who I am
Lluís Enric Mayans
@lluisenricmayans 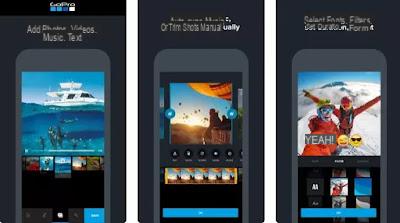 During the Christmas holidays, during the holidays, on a special evening and on every occasion in which several photos are taken to remember, it is possible easily create a video by mounting the various photographs one after the other, with transition effects and maybe even a soundtrack.
This editing activity is now really simple to do both on the PC and on the smartphone, using free programs that do almost everything by themselves.
We have seen, for example, how the Photos app is convenient for creating videos on Windows 10, while on Android smartphones and iPhones it is possible to use the automatic functions of Google Photos, which does everything by itself.

Remaining on the "mobile" theme, there is an application that stands out above all, Quik on GoPro, which is not only automatic and simple to use, but is capable of turn photos into a video of high quality, which seems made with professional software, to which it is possible too add music, writings and various effects.

Quik is a free app for Android and iPhone, without advertising, without limitations and without requiring an account to be registered.

Once Quik is installed, just open it on your mobile and choose the photos to turn into a movie among those present in the various image galleries.
In the selection of photos, you can also browse all those saved in Google Photos, if it is used for online backups.
The same can be done if you are using the GoPro Plus cloud service.
In addition to the photos videos can also be selected, with Quik extracting the parts he thinks are the most relevant to edit them in the new movie.

After choosing photos and videos to be included in the movie, you can write an introduction title, which will appear as a text at the beginning of the clip.
Quik will then immediately show the new movie automatically generated, with the option of modify it in different ways.
First of all, by touching the pencil, it is possible, for each added image and video, to make corrections and additions.
It is therefore possible to include more photos sooner or later using the right and left ++ keys, then add other writings (in addition to the initial one), rotate upside-down photos, focus them, choose the time in which a particular photo should be visible in the final movie, remove or duplicate to make them appear multiple times.

Once out of edit mode, it's possible choose the theme of the video among those available, to give it a more modern, more romantic, more won, more colorful, black and white or with different transaction effects.
This allows you to make the movie really special, as if it were made by the expert hands of a professional.

Touching the music note icon, it's possible change the background song choosing from those included in the application that are differentiated by gender: Love, Night, Cinema, Open Air, Sports, Travel, Summer and others.
If you prefer, you can use music saved in your phone, then any song in the music collection, or mute the music or mute the audio itself.

Finally, by tapping the cursors icon you can choose the duration of the final video, the display mode between portrait, cinema and square, the moment in which to start the music, the application of image filters similar to those of Instagram, choose the font of the writings, choose the color range of the video and use an effect that is called Outro, very scenographic.

At the end, the video can be shared via link (only those who have the link will be able to see it), sent as a File, shared in an Instagram story or you can simply save it in the smartphone memory for storage.
All these functions are free, therefore without tricks and deceptions, without advertising, without having to register an account, without being limited in downloading the movie.
For all these reasons we could easily put Quik in the first place among the best apps to create videos, ideal for transforming photos and albums into beautiful movies to watch without complications and in the simplest way possible, generating new movies and clips to share and, above all, to keep.